Minister Mekapati Gautam Reddy held a media conference yesterday on the occasion of two years of his swearing-in as minister of industries and IT. Since being sworn in as his minister, he has been impressed with the power presentation of the development that has happened so far. The policies implemented by the government for about 40 minutes are well explained. The analysis given by Minister Gautam Reddy was surprised by even media persons from the opposition and corrected with nominal questions. With his PowerPoint presentation, he once again proved his capacity and cable t as it and heavy industries minister. Without criticizing the opposition, he told the government’s procedures and once again said that the gentleman’s style of dealing would be. Minister Gautam Reddy said…. 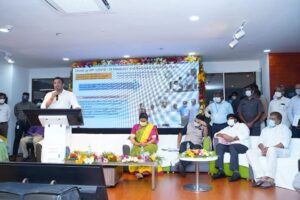 Skill Development and Training Minister Mekapati Gautam Reddy said that we are moving ahead with the goal of providing 75% job opportunities to the youth of the state in local industries. Accordingly, Minister Mekapati Gautam Reddy has made it clear that a total of 30 skill colleges will soon be laid in the state, including a skill university in the state, 25, 4 triple ITs and Pulivendula JNTU at a skill college in parliamentary constituency. The process of this has almost come to a head. The entire land acquisition process has already been completed. Administration approvals have also been received. Gautam Reddy said construction of these 30 skill colleges will start soon.

The Industries Department and skill development agency have jointly completed more than half of the ‘Comprehensive Industry Survey’ on what courses should be in each skill college. Minister Mekapati said that in the coming days, the government will sincerely step forward to identify the needs and youth ambitions and provide the necessary expertise to industries and thereby increase employment opportunities.
During the corona, the youth have been provided with the necessary skill training programs online. Minister Gautam Reddy recalled that the Andhra Pradesh State Skill Development Agency (APSSDC) has been recognized by the Genius Book of Records.